Safest Destinations to Book for a Mexico Vacation 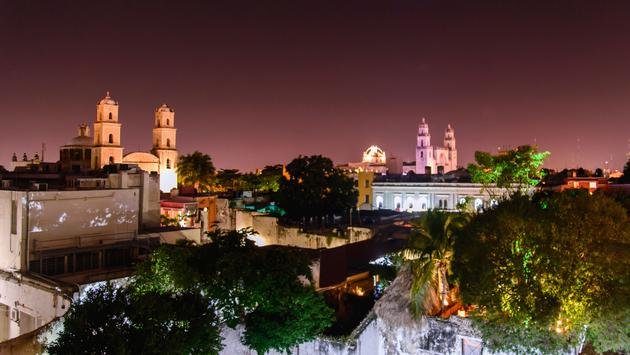 In Mexico, there are some very safe destinations that travelers can enjoy whether it is as a couple or with the whole family, such as the cities of Merida and Campeche, quiet places full of culture, good cuisine and first-class hospitality. Here are the destinations where travelers can feel safe and enjoy a few days of fun and relaxation.

The incredible capital of Yucatan, located in the southeast of Mexico, is considered one of the cities with the best quality of life in the country. Here locals and visitors enjoy days of tranquility walking its streets full of the history of the Mayan culture and the Spanish Colony in an environment of peace and safety.

In the heart of its historical center, which is the third largest on the continent, is Independence Square, which has at its sides the Cathedral of San Ildefonso, similar to a fortress, and the Church of the Third Order built in white limestone, as are many of the historical monuments of the city.

Casa de Montejo, a mansion built in the 16th century, is one of the best examples of Spanish colonial architecture. In addition, there are buildings with French, African, Lebanese, and Mayan influences, and MÃ©rida is recognized by UNESCO as part of the Creative Cities Network in the gastronomy category.

One of the city's most emblematic places is the Paseo de Montejo, which houses museums, hotels, banks and important government buildings. This avenue, built in 1888, is inspired by elegant French boulevards and boasts several beautiful mansions that can be admired while traveling by horse-drawn carriage or on a walking tour.

This town, located just two hours from Mexico City, is one of the best places to visit in Mexico. In recent years, security rates have improved significantly. As a result, it is now one of the most visited places for domestic and foreign tourists, especially from the United States and Europe.

The Historic Center of the city of Puebla is a World Heritage Site by UNESCO and one of the most important on the continent for the number of colonial buildings that are maintained in excellent condition. Tourists visit to admire some of the most impressive architecture of the Colonial era of Mexico.

In addition, Puebla is recognized for its gastronomic heritage and for the manufacture of the emblematic ceramics of Talavera, a distinctive pottery characteristic of the state of Puebla since the time of the Spanish Colony, which stands out for the oriental influence in its decoration which is one of the most valuable contributions of Mexico in the world.

Visitors have the opportunity to visit temples considered to be some of the most significant in the country, such as the Cathedral (the most important during the colonial era) and the Parish of Santo Domingo de GuzmÃ¡n, which houses the Chapel of the Virgen del Rosario, one of the best examples of baroque art in the world. Other temples include CompaÃ±ia de Jesus, St. Francis, and St. Augustine, among many other important historical monuments.

The walk through the center of Puebla city is a journey through history because tourists tour iconic sites such as the Teatro Principal, the first theater of America, the CallejÃ³n de Los Sapos (Toad Quarter), where antiques are bought and sold, the traditional El PariÃ¡n Craft Market, sweets factories established since colonial times, restaurants with specialties of the region and cozy boutique hotels built in old mansions of the time of splendor of this extraordinary Mexican city.

Campeche is the only walled city in Mexico and is located on the western coast of the Yucatan Peninsula. Although its extraordinary cultural heritage made it a UNESCO World Heritage Site, it also has the Travel Safety Stamp certification granted by the WTTC, in addition to meeting high standards of cleanliness and health for the benefit of locals and tourists.

This charming colonial port has extraordinary Spanish architecture with religious, military and civil buildings that visitors can tour along its cobbled streets. One of its most important attractions is the gastronomic tourist corridor Calle 59, located in the Historic Center of this magnificent city and reaches the sea after passing through the old gates protecting the port.

This site consists of historical buildings where museums, boutique hotels, art galleries, craft shops and cozy restaurants exist today. The historical importance of the city lies in its privileged position in the Gulf of Mexico which allowed it to be one of the most important ports of the Spanish Colony that transported from this place gold, silver and precious stones for Europe, so it was decided to wall it to avoid the attack of numerous pirates coming from the Caribbean. In addition, the city of Campeche was one of the most important commercial ports in Mexico and one of the world's largest exporters of salt and wood.

Queretaro, located two hours from Mexico City, is considered one of Mexico's three safest places to visit. In addition, it is recognized in the country for its world-class tourist services and the enormous amount of activities it offers to its visitors, both domestic and foreign.

The Historic Center of QuerÃ©taro, which has been declared a World Cultural Heritage Site by UNESCO, is a jewel of colonial architecture after having been considered the third city of the kingdom of Spain for its economic capacity, the importance of its temples, and a considerable number of convents and mansions.

The city stands out for its cleanliness and safety, making it very popular for domestic and foreign visitors, which adds to the beauty of its colonial buildings and its rich gastronomic offer and fun for the whole family.

The iconic arches are located in the east of the city and are the symbol that identifies QuerÃ©taro in Mexico and the world. This monument comprises 74 quarry arches with a height of 25 yards and a length of approximately 1.2 miles. One of the most critical places in the Historic Center of Queretaro is the Casa de la Corregidora, built-in 1770 by the Spanish Crown. This site has been the scene of significant events in the history of Mexico, such as the Independence war against the Spaniards.

Several temples were built during the colonial period, such as Santa Maria de Guadalupe, the MesÃ³n de Santa Rosa, an 18th-century building located in a historic place where in the time of splendor of the city came large shipments of gold and silver. Another place no visitor should miss is La Casa de la Marquesa, an incredible building of the 18th-century Arabic style, among many others.

Visitors to QuerÃ©taro receive help from the city's tourist authorities by offering two-hour pedestrian tours to learn about the city's history with characters who tell essential events along the streets and mansions of the Historic Center.

WTTC Reveals the Top US Travel and Tourism City Destinations

How to Experience Panama's Cuisine

Why Mexico's Top Tourist Destinations are Safe to Visit

Netflix accidentally posts guidelines for cracking down on password sharing